Vale. Venga. Vamos. My roommate and I half-kidded throughout the semester that all you need to know in Spanish are these 3 words. But we were also kind of serious because you use and hear these 3 words all. the. time. But the real question is, what do they mean? 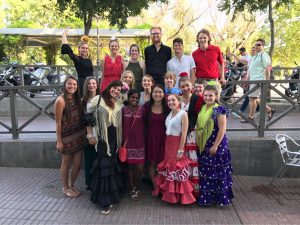 Vale – everything affirmative, such as, okay, gotcha, mhmm, sure, etc. Usually used twice, so you would say, “vale, vale” if you wanted to sound more authentically Spanish. Once I figured out what it meant I used it every day, and I said “vale” to numerous things over the course of the semester. Whether it was trying new foods like morcilla (blood sausage), octopus with visible suckers, clams still in their shells, whole shrimp–shell and all, and lastly, snails! I said “vale” to traveling around Europe, making mistakes and learning from them, and having the opportunity to explore some of the most amazing European cities like Zurich, London, and Amsterdam. I hesitantly said “vale” to learning how to dance Sevillanas which ended up being one of my favorite Sevillan experiences! I said “vale” to big and small adventures whether it was having a picnic by the river, seeing Roman ruins right outside Sevilla, hanging out with my intercambio, visiting a new musuem, or meeting a friend to try a smoothie shop. I moved from hesitantly saying “sí” and smiling and nodding because I only understand half of what was being said to me to confidently replying “vale!” and comprehending what was being asked of  me or what would happen. Look what four months of immersion can do to you! 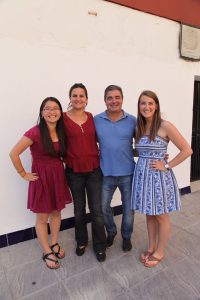 My roommate & I with our host parents

Venga – literally translated it is a command to “come,” but you can put it on the end of sentences as a sort of affirmative. It works well if you or the person you’re talking to is leaving to go somewhere. Don’t ask me exactly how that works but it does. God clearly told me to come to Spain for this semester. It was not easy, but I obeyed and followed Him. I spent a semester in Sevilla and have absolutely no regrets in doing so. I’m so incredibly thankful that I came, that I had excellent experiences, made some fantastic friends, fell in love with spectacular Sevilla, and now have marvelous memories to last a lifetime (yes, the alliteration was on purpose). It has been a reminder to me to trust and obey the Lord even if my heart is being torn in two or I don’t see the good that will come out of it. Jesus has called me to come and follow Him, the same way He called his disciples, and like them, what can I do but obey? To leave behind my college, my friends, my family, my familiarity, and to step out into the unknown, not knowing how He’ll provide and what He will give to me or maybe what He will withhold so I will grow and flourish in new ways. 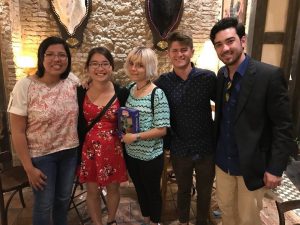 Vamos – probably one of the most commonly known Spanish words. It means “let’s go!” Used all the time for obvious reasons. As I write this post, I am no longer in my beloved Sevilla. My semester ended a couple of weeks ago and I have gone from the city. I have left, and I don’t know when or if I’ll ever return. Oh, I do want to visit Sevilla again someday but the Lord only knows when. It was harder to leave than I thought it would be because I had truly fallen in love with the city. I loved my host family. I had made some wonderful Spanish friends. The city now felt like home, a place where I was comfortable and familiar. I could use my Spanish to understand and to be understood. I had found my place within the culture though I was constantly learning new things. Why did I have to uproot again and leave another part of my heart behind? Because it was time to go. Ecclesiastes 3 says there is a time for everything, and it’s true. It was time to vamos. I knew that deep in my heart, even as it hurt to say goodbye. This chapter has closed and a new adventure will begin (the Camino de Santiago!). There is a time to say “hola, ¿cómo estás?” and there is a time to say “vamos, adiós!” So, Lord willing, it’s not a forever goodbye but only hasta luego! Gracias por todo a Sevilla y toda la gente que ha sido parte de mi vida en este tiempo. A thank you for everything goes to Sevilla and all the people who have crossed paths with me during this part of my journey. 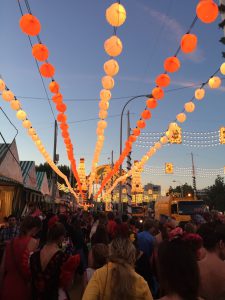 Thankful to have spent the semester with y’all!