I still have a hard time believing that I am actually here. The last few days have been a bit overwhelming but a lot of fun. The flight from Chicago to Madrid was about 7 hours but it went by way faster than I thought it would. At the beginning of the flight they served us dinner, then I slept for a few hours and they served us breakfast. Although it was actually about midnight Chicago time it was 7 am in Spain. The flight certainly helped me to adjust to the time change. Once we landed in Madrid we had about 5 hours before our next flight. I was able to take the group flight with about 35 other students in the Semester in Spain program, so I had plenty of people to talk to and get to know on the way here! I was a bit concerned that everyone would be speaking Spanish from the very beginning, however at the airport we were spoken to in English which made it much easier to get to know everyone!

Once we landed in Spain we were dropped off with our Señora’s at our new homes. I love Señora Marta! She has been working with the Semester in Spain program for 15 years so she has a good idea of what us crazy american students are like. She has things like nutella, ketchup, and cereal which I was not expecting to eat since they are not common in Spain. One of the best things is she is wonderful at speaking slow and she can repeat herself in multiple ways until I understand what she is saying. 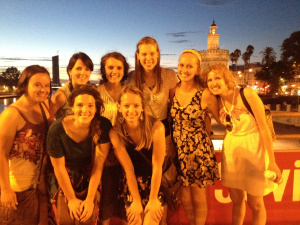 A group of us walking home together tonight

Yesterday my roommate Becca and I walked around the city a little and saw this fantastic park right across the street from our apartment. Marta says she loves running in the park and we will probably go jog with her sometime next week. Today was orientation at school which was a little long and a lot of information. After orientation Becca and I came home for lunch and our siestas! I love that it is perfectly normal to take a nap in the middle of the day. After orientation I was feeling a little overwhelmed, it can be exhausting trying to talk to someone but not knowing the right words and having to ask them to repeat themselves over and over.

Things got better tonight when we went on a tour of the city. We were in smaller groups and we had group leaders who live in Spain and are about our age. During the tour I saw some amazing sites, but the best part was talking to all of my classmates in Spanish! I would say that I have a pretty limited vocabulary in Spanish, but there are a lot of words I learned once and have since forgotten. While I was speaking with my classmates they would use some of these words, and in context I was able to figure out what they were saying. Being able to hold a conversation in Spanish was exciting. I find it easier to talk with the other students in the group than it is to talk with native Spanish speakers, but I am sure that will come with time. 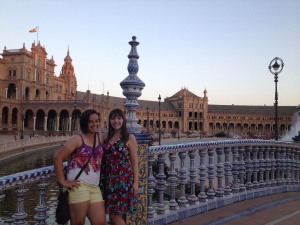 Overall I am LOVING it here in Spain! Tomorrow I officially register for classes and they start on Monday. I am not sure if I am ready for classes to start, but all the classes I am taking are focused on teaching me Spanish so all I will have to worry about is learning the language, that and where I want to travel while I am in Europe ;)