The first day that I arrived in Spain, I was dropped off at Gym Galisport, a local fitness center in Triana. About 20 minutes later, I finally found my house, which in reality was about 100 feet from the entrance to the gym. From the first time I saw the gym, I thought it would be really cool to get a membership there so I could workout and also meet—and talk to—Spaniards. However, I started coming up with excuses: It would cost too much. I didn’t want to “waste” my time in Spain working out. I got enough exercise walking, I didn’t need to go the gym also. I wouldn’t have time.

Last Wednseday, after a motivational Encuentro where we talked about stepping outside of our comfort zones, I finally took the plunge. I walked into the gym—completely alone—and asked if there was a short-term membership available. An hour and a half later, I walked out—with wet hair from my swimming workout and with an amazing sense of accomplishment. My success in this made me realize that I really could live in Spain, or in a country where they speak Spanish, all by myself!

This has continued to be a great decision, and a great use of 40 euros. Yesterday, after I swam, an older man came up to me and started telling my how I swam like a fish and how my feet were like the motor of a boat. I laughed and said thank you and we had a little conversation. Then, today, this man—Juan—was at the pool again. When he saw me walk up, he had a great big smile on his face, waved, and his best American accent said “hello!” We ended up having a 15-minute conversation—completely in Spanish! It was so cool. As I headed back into the water to finish my workout, I felt on top of the world. I had just had a legit conversation with a complete stranger! Totally worth the 40 euro membership. 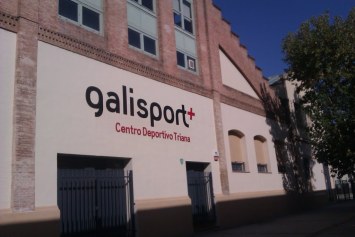 THE GYM WHERE I NOW HAVE A MEMBERSHIP!