A few things about Sevici….

Okay so here’s the deal. Sevilla has a fantastic bike system that’s super convenient and really fun…but it also has its challenges.

This is for to anyone who plans on using the Sevici system in Sevilla, or anyone who wants to be thoroughly entertained.

Things to look for include…

I usually try the casual walk by gently press down on seat approach for scoping out a bike…you know, the “I don’t wanna look like a tourist even though I totally do” kind of walk. After several interesting adventures…I don’t think I would necessarily recommend this tactic. I’ve nick named several bikes in the city and so far, I’ve had the privilege of riding Señor Seatispermanentlytootall, Señorita Seatiswaytooshort, Janky, and Jingly.

Also, a note on off-roading…The park is a great place to explore…but to get to the fun island gazebos…you are required to climb several large steps. When you’re on a bike and you come across stairs, the logical thing is to simply hoist the bike up over the steps and continue, right? WRONG. These are no normal bikes. These things are heavy! But if you’d like to provide a show for your fellow onlookers…go ahead and hoist! 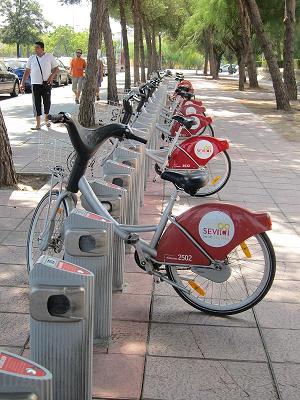 PLEASE NOTE: My vivid descriptions of certain situations may or may not be directly from experience. Just wanted to help out those future Sevici-users out there.